This waymarked trail, launched at Winchcombe’s walking festival in 2014, follows the River Isbourne from its source on Cleeve Hill to its confluence with the Warwickshire Avon at Evesham, a distance of some 14 miles.

The Isbourne Way weaves existing footpaths into a route starting at the Washpool on Cleeve Hill, it passes through Winchcombe, Toddington, Wormington and Sedgeberrow, and ends at Evesham. The trail features woods, open countryside, villages and towns with pubs and shops, and sites of interest such as mills and churches.

Despite its small size, the Isbourne has been an important source of power, exemplified by the mills at Dumbleton and Sedgeberrow shown above. 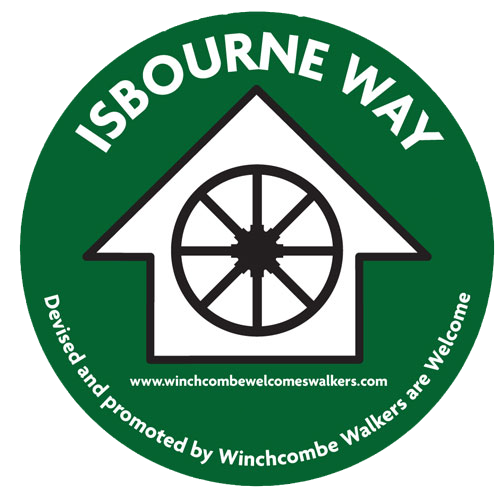 The Isbourne Way itself is waymarked throughout using the mill wheel motif shown. The prologue, the epilogue and the ‘return’ routes are not identified on the ground, but are signed with the standard arrows – yellow for footpaths, blue for bridleways.

The text refers to the bus services that operate at points along the route, and to the opportunities of using the train on the restored Gloucestershire Warwickshire Railway.

The Isbourne Way: The Official Guide

The Isbourne Way itself is linear, but it can be tackled in various ways – all explained in the companion booklet published by Winchcombe Walkers are Welcome.

The booklet divides the route into five sections, each of which has a ‘return’ route. This enables the walker to start at (say) Winchcombe, take the Isbourne Way to Toddington, then use the ‘return’ route to go back to Winchcombe.

A prologue sets out one way of reaching the source from Winchcombe, and an epilogue offers ways of returning to Winchcombe from Evesham. The sections are fully described, and illustrated with maps and photographs.

The booklet is completed by some notes about the sites of interest along the trail.

To order your copy

Please pay by internet banking and send an email with details of your order and delivery address.

The booklet can also be purchased from outlets in places on or near the route, such as Winchcombe (TIC, Food Fanatics, Keelings Newsagents) and Evesham (TIC).